Department of OBG Nursing in RajaRajeswari College of Nursing organized Nursing Quiz Competition. Subjects chosen were OBG Nursing and Child Health Nursing with a good measure of contribution from General Knowledge. A total of 20 teams were participated in the event. All participating teams underwent preliminary written test and the best five (5) teams were qualified for the final round. The quiz was conducted in different rounds with questions on Terminologies, Abbreviations, Situational analysis, Instruments, Visual clips and Drugs in Child health Nursing OBG Nursing. A rapid fire round was also included. There were also rounds on General Knowledge. It was a tough competition. The juries of the programme were Mrs.Kanchana.M.Naik, Mrs.Asha Sajji and Ms.Aruna Jyothi. 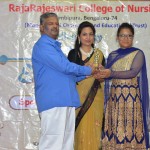 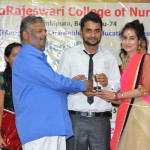